IRA gunmen cheered as they drove away after a 1989 ambush which killed two senior RUC officers a few hundred yards from the border, the Smithwick tribunal heard. 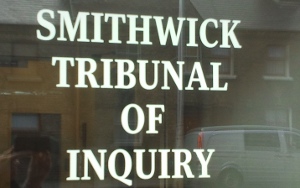 Former Irish Army veteran Finbarr King and other eyewitnesses described how they were stopped by men wearing combat fatigues, and made to lie face down until the car carrying the two RUC men arrived at a spot hundreds of yards from the border.

Mr King, a former Irish soldier who served in the Lebanon and Cyprus, who worked as a manager at a garage and scrapyard in Northern Ireland, was driving a mechanic to a broken down vehicle when he came upon the impromptu IRA “checkpoint” about 300 metres on the northern side of the border.

Mr King said that as the officers’ car approached, it was overtaken by a van, and several men got out. He heard a burst of gunfire, and then a single shot.

“They all got into the car and as they were exiting the area they let a big roar, like hurrah!” he said.

The tribunal is looking at claims of Garda collision in the killings of Chief Supt Harry Breen and Supt Bob Buchanan in March 1989.

Earlier a retired RUC collator contradicted the evidence of an Assistant Chief Commissioner who said he ordered two men not to cross the border days before they were killed in an IRA ambush.

The collator, identified at Witness 36, worked collating intelligence reports on paramilitary activity in the border region in the 1980s.

He said that at a meeting days before the ambush, Supt Buchanan was told to meet with Garda officers about a planning anti-smuggling and money laundering arrangement, and to bring Chief Supt Breen to the meeting.

The order was given by the Assistant Chief Commissioner for Rural East, covering Armagh, down and parts of Tyrone.

Yesterday, the ACC said he had ordered both Breen and Buchanan not to cross the border.

“If he was told not to go, he wouldn’t have went,” the collator said.

“Mr Breen and Mr Buchanan, they were two good officers, they followed the directions they were given.”

Retired assistant chief constable David Cushley, who was head of operations in 1989, also said he wondered why a direction not to cross the border would have been given to the officers, given the instructions they were given to plan a cross-border operation.

And he said he would be “astounded” if they has disobeyed an order.

And he said he was not told by the Rural East ACC that Mrs Breen would have to be told her husband disobeyed an order.

“Why would he be telling me that?” Mr Cushley asked. “If that had ever been mentioned in my presence, I do believe it would be etched in my mind to this day, and to my dying day.”

He said such a statement would be as memorable as where people were when they heard the news of President John F Kennedy’s assassination.

Asked if he would have been told of reports of an IRA “mole” in Dundalk garda station, he replied “Possibly, probably. Not definitely.”