End of an Era at Examiner

An edited version of this article first appeared in Village magazine, December 2017 edition.

The proposed Irish Times buyout of Landmark Media, owner of the Irish examiner and several other titles, as well as regional radio station shares, comes as little surprise, having been well flagged for several months. If anything, the surprise is it took so long for the struggling Cork-based media group to sell itself.

As early as last February, the Irish Times reported that Landmark was in talks with Independent News & Media (INM) over a possible takeover, as the company struggled to ser4vice its €21 million debt. 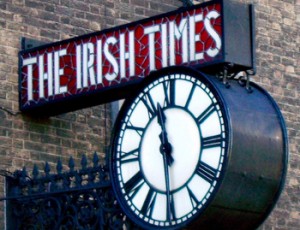 At the time, INM was already undergoing a competition review of its plans to purchase Celtic Media. The Competition and Consumer Protection Commission (CCPC) had okayed the planned deal in November 2016, but because the merger involved media companies, it also faced a review by the Broadcasting Authority of Ireland. However INM and Celtic Media called off the deal in June days before communications minister Denis Naughten was due to give his determination on the BAI’s merger report. Perhaps dissuaded by the lengthy competition review process, INM had already declared that it was not interested in the Examiner in April.

Landmark Media emerged from the ashes of the Thomas Crosbie Holdings receivership in 2013, and in addition to the Irish Examiner it owns eight regional newspapers as well as shares in radio stations Beat 102 103, WLR FM and RED FM, and several websites, including most recently the acquisition of Benchwarmers, a sports news website.

The Irish Times emerged as a possible bidder for the Examiner in March, as reported in the Sunday Business Post. By July, there were more reports of interest from Trinity Mirror, provincial publisher Iconic Newspapers and Rupert Murdoch’s News Corp, although the Irish Times was “in pole position.”

The clear picture from the various reports over the course of the year was that the Crosbies were hanging a large “For Sale” sign over their properties, either collectively or broken up into their constituent parts.

The group appeared to be in a race against time, even closing down the Echo titles and appointing a provisional liquidator in June , and winding up the Irish Examiner Pension Scheme in August.

Even so, negotiations dragged on, with suggestions at times that Landmark Media was for sale as a job lot, and other times that it would be broken up, with the remaining provincial titles going to Iconic and Rupert Murdoch’s recently acquired Wireless Group expanding its footprint by taking the local radio stations.

By September, the sale of the Irish Examiner to the Irish Times had been agreed in principle, but with several million in outstanding bank loans, there was clearly a lot of work still remaining. Iconic was reported to be taking the regional titles. It was not until the start of December that the deal was finally announced. All other buyers having dropped out, the Irish Times was taking over all of Landmark Media, with the exception of the Echo papers in liquidation.

So what happens next? The Irish Times deal seems likely to pass muster with the CCPC and BAI (it will certainly have an easier time doing so that if the buyer had been a 900llb gorilla like Rupert Murdoch or Denis O’Brien), but even so, the competition reviews are estimated to take until at least Easter. With Iconic apparently dropped out, the chance to recoup some of the investment by selling regional titles to a company with expertise in running them may be gone for now, and getting the sale of radio stations to the likeliest buyers (the aforementioned gorillas) still seems like a bridge too far given the regulatory hurdles. The Irish Times has previously said they intend to operate the companies in the group as a going concern, so has the Trust shot itself in the foot in a bid to stop its rivals getting hold of the Examiner?

Perhaps not. Properly managed, the Irish Examiner, even it its current perilous state with sales below 30,000 copies daily, still commands a loyal following in Munster, particularly in Cork. Production synergies, where contributors and production staff work across both newspapers, are notoriously difficult to achieve in practice, but if done well, and if reports of a rumoured bank debt write-off are accurate, the paper could stabilise. The Irish Times has already proven it can sell subscriptions – both online and in print – in Dublin. That same expertise applied in the home of De Paper could right the ship.

Preserving the character that makes the Examiner’s journalism stand out may prove more difficult. No matter how much new owners pledge to preserve editorial integrity and independence, ownership matters, even if only because of the decisions owners take about who to put in charge. That question is particularly pertinent with the Examiner, which has been without a full time editor-in-chief since Tim Vaughan stepped down last year, with Allan Prosser filling the gap as acting editor.

The Paper of Record is very often the Paper of Official Records, while in recent years the Examiner, perhaps insulated from the usual pressures on news reportage in the capital due to its location in the second city, has championed stories which challenge official versions of Ireland, from Michael Clifford’s dogged coverage of the Maurice McCabe saga to Conall Ó Fátharta’s work on the abuses uncovered at Mother and Baby homes from Tuam to Bessborough.