Barack and Boyle: The Glen Connection

For many Irish people, the election of Barack Obama was greeted warmly this week, but the residents of one west Donegal Gaeltacht parish there is an extra reason to celebrate. 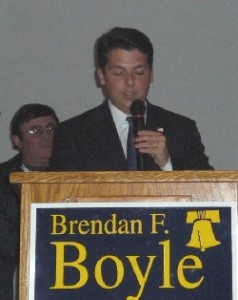 Francie Boyle, a native of Gleann Cholm Cille (Glencolmcille) attended the count in the key swing state of Pennsylvania not only to see Barack Obama win the vote on his way to the presidency, but to see his son Brendan elected to the state legislature.

Francie left Ireland at the age of nineteen in 1970, moving to Philadelphia where he met and married Eileen Walsh, whose father hails from county Sligo.

“We didn’t get home home until 5am in the morning on Wednesday, the night of the election.”

Brendan (31), their oldest son, first ran for state office for the Democratic party four years ago, and lost narrowly in 2006 to Republican George Kenney in one of the closest races in the state.

This time round, Brendan won convincingly by a margin of 59% to 41%, in a campaign which all the family pitched in to help with, particularly his brother Kevin (28), who acted as campaign manager, and his father, an enthusiastic canvasser.

Earlier this year, both brothers were named in the “Top Ten rising stars” in politics by the Philadelphia Daily News.

Then both did masters degrees at the John F Kennedy school of government in Harvard university.

When he walked out to make his victory speech this week, the band played the ‘Fight Song’, the theme tune of the university’s famous ‘Fighting Irish’ football team.

Francie himself has a long interest in politics, actively involved in his local trade union.

“I was always very interested in politics. That and sports.”

Indeed, one of his and Brendan’s fondest memories is of watching the Donegal team win the All-Ireland via satellite coverage in 1992.

“I was out canvassing every day since March. There was a crew of us out there campaigning all the time,” Francie added.

“To be honest, I have a pretty competitive nature.”

“It was a hard fought election, Brendan thought it would be closer, but it turned out we had a bigger victory than we thought.”